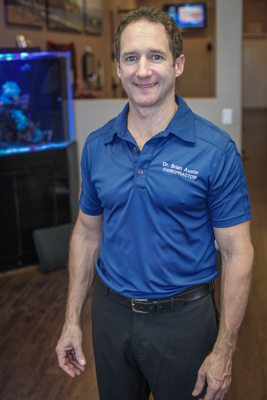 Dr. Brian Austin was born and raised in Massachusetts. He graduated from U-Mass, Amherst in 1995 with degrees in Physiology and Psychology. He was able to eventually live his childhood dream of being a professional motocross racer and traveled the country from 1992-1995 as a top AMA pro. Health, fitness and injury recovery were, and still are, top priorities during his stint as a professional athlete. Once he completed his journey as a professional motocross racer Dr. Brian transitioned into two things he loves; golf and chiropractic care. He has served as a chiropractor at the U.S Open in 2008 (Torrey Pines), 2010 (Pebble Beach), 2012 (Olympic Club) and 2014 (Pinehurst).

Being a chiropractor was always a natural fit for Dr. Austin. He graduated Palmer College of Chiropractic-West in 2000. Since then he has owned and built several successful chiropractic offices throughout Southern California. Throughout his chiropractic career he has delivered hundreds of outside health related lectures to corporations throughout the San Diego community on the importance of healthy living.

Dr. Brian takes a unique approach to treating his patients by combining corrective chiropractic adjustments and functional movement for progressive rehabilitation. He uses a large arsenal of chiropractic techniques that will help get you on the road to recovery fast.